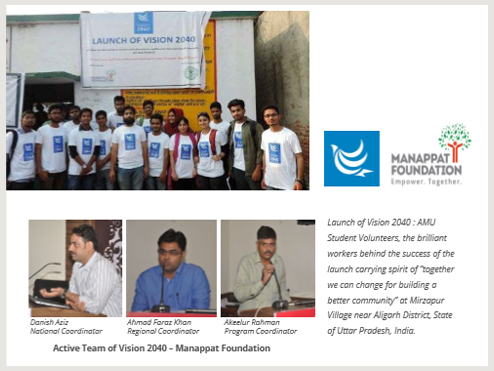 Vision 2040 is a project for the betterment of the marginalised population in the backward districts in the state of Uttar Pradesh, India.

Manappat Foundation (MF), in association with Aligarh Muslim University (AMU), is embarking on Vision 2040, a project aimed at uplifting the marginalised communities of Uttar Pradesh. The aim of ‘Vision 2040 is to adopt 60 villages in the 10 most backward districts of Uttar Pradesh and apply its Comprehensive Development Model (CDM) under the framework of health, education, economic empowerment and socio-cultural reforms.

Goal 2040: To achieve significant advancement in the educational, economic and social status of the community.

MISSION STATEMENT: To deliver appropriate interventions in the field of education, economic development, and social spheres of the most marginalised communities of Uttar Pradesh to enhance their status within the society.

“If Muslims in Kerala have prospered in the past 60 years, so can the Muslims living in Uttar Pradesh,” said Mr. Ahamed adding that people in Aligarh and other cities of Uttar Pradesh should start uplifting the underprivileged in their neighbourhood and then move to far off places with the same vision. The AMU Vice Chancellor pointed out that CEPECAMI will help us to establish a chain of Sir Syed Public Schools under the Sir Syed Foundation. “With Mr. Ameer Ahamed, we will also work together for women empowerment,” he assured.

The Manappat Foundation (MF) has recently entered into a Memorandum of Understanding (MoU) with The ‘Centre for Promotion of Educational and Cultural Advancement of Muslims of India’ (CEPECAMI), Aligarh Muslim University for implementing the ‘Vision 2040’ Project aimed for uplifting marginalised sections of the society and make them self- reliant by imparting training, education and self-employment opportunities. The Managing Trustee of Manappat Foundation Mr. Ameer Ahamed and AMU Registrar, Dr. Asfar Ali Khan, signed the MoU.

This MoU shall be valid initially for a period of one year, subject to further extension based on assessment of outcomes.

Vision 2040 Project was conceived by Manappat Foundation, a Kochi based registered charitable ‘Trust’ working all over India for the development of marginalised sections of the population of Uttar Pradesh and other areas.
After the signing of the MoU, CEPECAMI and MF will jointly organize campaigns for spreading awareness about the Vision 2040 Project.

They will also work together for the identification of needs of the target beneficiaries, project goals and expected results for implementing Vision 2040.

The two organisations will further work together to evolve a federation for education, entrepreneurship and livelihood of institutions, NGO’s and individuals committed in contributing to the betterment of the marginalised communities.

The MoU document signed between the CEPECAMI, AMU and MF stated that they will engage in arranging awareness classes for the villagers on the need of health, hygiene, self-employment and collective farming opportunities.

This document further clarified that they will establish facilitation centres in rural and urban areas regarding governmental schemes, grants and governmental initiatives like ‘Right to Information’, ‘Right to Education’, etc. The MoU also includes the establishment of vocational coaching centres, entrance coaching centres, ‘Padho-Bhado’ schemes and identifying school drop outs and to work for increasing gross enrollment in schools.

Offering health assistance through mobile medical units, installing solar lights, bore wells and constructions of public toilets will also be a part of the joint work of MF and CEPECAMI, AMU.

With the signing of the MoU, AMU will now arrange office space to facilitate MF and will provide volunteers from the university to work on the Vision 2040.

CEPECAMI, AMU shall provide advisory services for the promotion of culture and education among Muslims identified for the project.

The document also stated that CEPECAMI shall play a lead role in statistical data collection, data analysis and in the preparation and the implementation of the resultant action plan for the development of the targeted segments as conceived in Vision 2040.

The CEPECAMI shall also act as a catalyst for the welfare of the marginalised and underserved communities as envisaged in the project.

Meanwhile, MF will be responsible for mobilizing the funds required for implementing the Vision 2040 Project and shall arrange the same through its own resources as well as with the help of other philanthropic organisations and individuals.

The document specifically mentioned that the MF will establish an evaluation framework for the appraisal of the progress of Vision 2040 and ensure target achievement under the Project. MF shall also lay down organisational supervision and oversight requirements for the project.

The Manappat foundation has also set up an informal school in Aligarh, and adopted a village in Hathras, Uttar Pradesh, India. It has also tied up with ITI in Bijnaur District (UP) for identifying technical talent in various trades needed for the construction industry. A winterization camp was also held in these areas in furtherance of the Manappat Foundation Vision 2040 project. 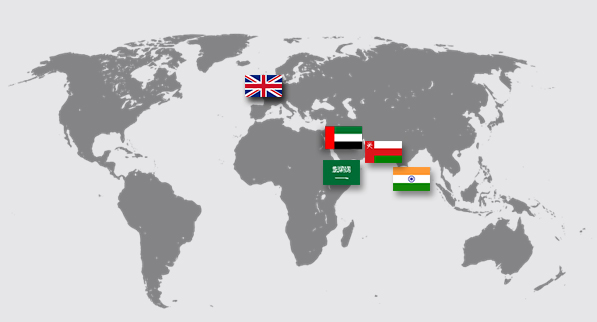 The Manappat Group is a vibrant, versatile business house with an unrivalled portfolio of interests and investments across the Sultanate of Oman, United Arab Emirates, India and Saudi Arabia.